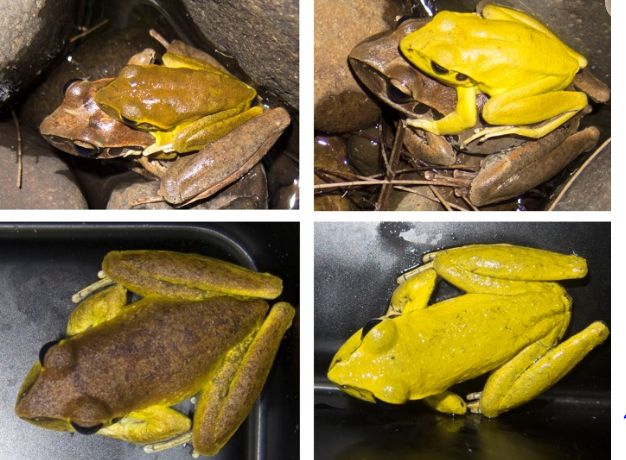 Sexual signalling using dynamic skin colouration is a key feature in some vertebrates; however, it is rarely studied in amphibians. Consequently, little is known about the hormonal basis of this interesting biological phenomenon for many species. Male stony creek frogs (Litoria wilcoxii) are known to change dorsal colouration from brown to lemon yellow within minutes. This striking change is faster then what has been seen most amphibians, and could therefore be under neuronal regulation, a factor that is rarely observed in amphibians. In this study, we observed colour changes in wild frogs during amplexus to determine the natural timing of colour change. We also investigated the hypothesis that colour change is mediated by either reproductive or neuro- hormones. This was achieved by injecting frogs with epinephrine, testosterone, saline solution (control 1) or sesame oil (control 2). A non-invasive approach was also used wherein hormones and controls were administered topically. Male frogs turned a vivid yellow within 5 minutes of initiation of amplexus and remained so for 3–5 hours before rapidly fading back to brown. Epinephrine-treated frogs showed a significant colour change from brown to yellow within 5 minutes, however, testosterone-treated frogs did not change colour. Our results provide evidence of the role neuronal regulation plays in colour change systems.